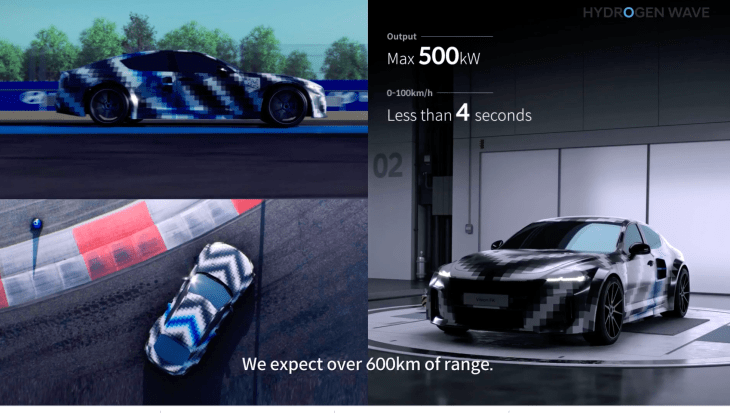 Hyundai Motor Group is backing hydrogen as a top energy solution for sustainability. With its new fuel cell system that it plans to launch in the next few years, the South Korean automaker said it will provide hydrogen fuel cell versions for all its commercial vehicles by 2028.

Hyundai announced its strategy for the future of hydrogen on Tuesday during a livestream of the automaker’s Hydrogen Wave conference. Saehoon Kim, executive vice president and head of the fuel cell center at Hyundai Motor Group, said Hyundai’s goal is to also achieve cost competitiveness comparable to that of EV batteries by 2030.

The company also shared details about its high-performance, rear-wheel-drive hydrogen sports car, the Vision FK, with a 500kW fuel cell system that can push it from 0 to 100 kilometers per hour in less than four seconds and has 600 kilometers (373 miles) of range. Hyundai did not share when the vehicle would go into production.

As most automakers begin to roll out electric vehicles for both passenger and commercial use, hydrogen is still a bit of a niche market, but one that is growing as Europe, China and the United States set ambitious emissions reductions goals. Toyota Motor Corp., BMW and Daimler have all begun embracing hydrogen fuel cell technology to varying degrees, even as they continue to develop exclusively electric vehicles. For its part, Hyundai’s commitment to hydrogen doesn’t deter from its commitment to electric. With the climate situation as it is, we’re facing an all hands on deck situation. May the best fuel win.

At the event, Kim also announced Hyundai’s plans to launch two new hydrogen fuel cell powertrains in 2023, which the company hopes will help make hydrogen mainstream by 2040. The third generation of Hyundai’s hydrogen fuel stack will come in either 100kW or 200kW outputs for either passenger cars or commercial vehicles, respectively.

Hyundai boasts a fuel cell SUV, the NEXO, with plans to introduce the next model in 2023, alongside a hydrogen-powered multi-purpose vehicle model. The company announced at the IAA Mobility conference in Munich that it would also launch a large fuel cell-powered SUV after 2025, as well as four more commercial vehicles by the end of the decade. The company aims to provide fuel cell technology for different use cases, including emergency vehicles, ships, freights, trams, forklifts and other vehicles for industrial processes.

“Fuel cell is a proven technology that can deliver the benefits of hydrogen to people around the world in various fields,” said Kim. “Basically, a fuel cell is a power generator like an engine. It differs from a battery which stores electricity. A fuel cell system consists of a fuel cell stack that generates electricity, a hydrogen supply system, an air supply system and a thermal management system. It generates power by combining hydrogen and oxygen, similar to the engine of an internal combustion vehicle, but without the carbon emissions.”

Kim went on to explain that fuel cell systems produce energy through chemical reactions and operate as long as hydrogen fuel is supplied, unlike a battery which just passively stores energy. He said Hyundai is working on building up the necessary ecosystem to create success in the hydrogen space, including production, storage, fuel cell technology and infrastructure. Much of the infrastructure would be solar and wind sources that would produce the renewable energy needed to create clean power to split water into oxygen and “green” hydrogen.

Alongside its own research and development, Hyundai Motor has also already invested in hydrogen startups like H2Pro and has announced plans to establish green hydrogen infrastructures in countries with supportive governments and abundant renewable energy resources.

Much of the movement in this space comes after the group announced its commitment to become carbon neutral by 2045 and to reduce its emissions by 75% below 2019 levels by 2040. By 2030, Hyundai expects 30% of all vehicle sales to be zero emission, with battery electric and fuel cell electric vehicles taking up 80% of total fleet sales by 2040.